Flash Mob in the Woods 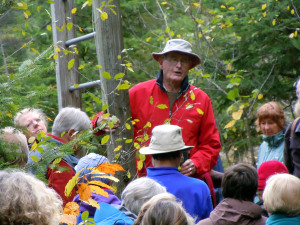 Alen Richens gives the history of the trails

We probably broke some record for trail traffic on Sunday, October 16, when more than fifty walkers and at least ten dogs joined Alan Richens for a historic walk along Chelsea’s trail system. The route began at the Municipal trail on Musie Road, travelled up the ridge and followed the chain of beaver ponds to end at the Larrimac Golf Course. This is the second family hike organized by Chelsea trails to introduce community members to another piece of the longstanding network of nature trails that wind through our neighbourhoods. The group walked for more than three hours, stopping along the way for Alan to explain the history of some of the routes that he has been walking and skiing for more than fifty years. Some of the trails were even named, by Alan and friends including the Northwest Passage the top end of Larrimac Golf course.

Thanks to George Rogerson and Heidi von Graevenitz for organizing the event. And there will be more! Chelsea trail will be planning more trail exploration outings in the future. Stay tuned